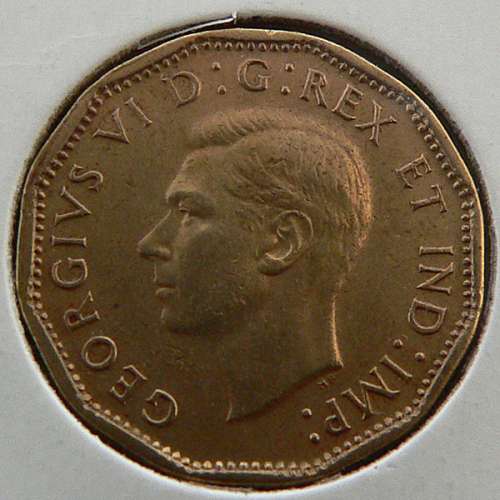 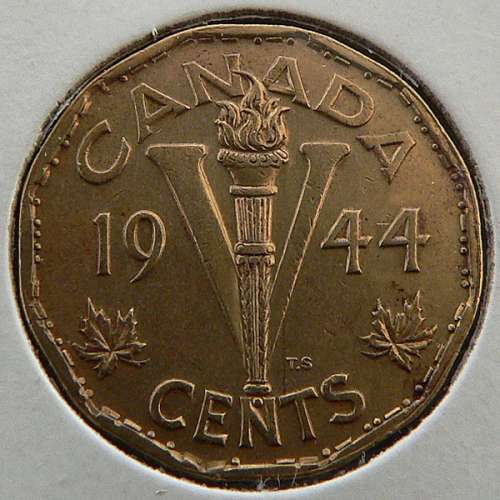 The George VI Canadian Tombac 5 Cents 1944 is considered the rarest regular-issue Canadian coin in existence. This unique piece was struck in tombac, rather than the normal chromium-nickel plated steel of the year. Tombac, a brass alloy is composed of 88% copper and 12% zinc. Tombac was used for “war time” 1942 and 1943-dated five-cent coins as a substitute for earlier nickel planchets, as an effort to conserve nickel—a metal essential for the production of military vehicles and hardware used in World War II.


According to the 1944 Royal Canadian Mint report, 8,000 tombac five-cent pieces ($400 in face value) were struck in 1943, but dated 1944. This unique coin is the only known specimen of the original mintage--no other has surfaced in the last 74 years.


From Numista, catalog of world coins:

To help promote the war effort, this new design consists in a central "V", meaning both victory and the facial value with the inscription "CENTS" underneath flanked by two maple leaves, on which is superimposed a torch, with on both sides a part of the year and above the inscription "CANADA". Around the rim is the Morse code message "We win when we work willingly".
Lettering: V CENTS CANADA 1943 T.S
Engraver: Thomas Shingles
Interrogé, je m'interroge...
Haut